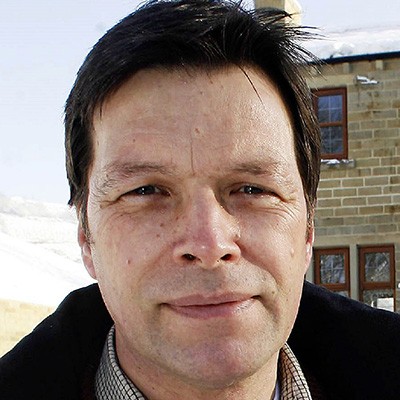 A NEGLECTED amenity in the centre of Oxenhope could receive a clean-up later this year once potential legal or ecological obstacles have been overcome.

The duck pond off Station Road has become choked up with undergrowth.

People keen to see it cleared have set up a Facebook page called Clean up the Horseshoe Dam.

But they also warned of the need to first try and establish who might own the site, and to make sure no wildlife is disrupted.

Cllr David Ashcroft (picture above) stated, “The pond has been like this for 15 years with no one taking responsibility for it.”

“There is a lot of concern over the mess that it’s in, but we need to be careful we don’t jump in and do something that turns out to be illegal.”

“If we go and clear stuff and disturb wildlife such as nesting birds we’d be committing an offence.”

“It would be a good idea to have some sort of proper ecological plan in place. That would be the right way forward, and shouldn’t involve a great deal of work.”

“It’s about getting the balance right between seizing the opportunity to use people’s enthusiasm, while not doing something that makes the situation worse.”

Oxenhope resident Roger Smales, a member of the Clean up the Horseshoe Dam group who attended the council meeting, said, “It is such a mess at the moment, and it needs something doing to it as soon as possible.”

“There are no ducks now, there is hardly any water in it and it’s deteriorating. There is also rubbish in the stream which needs tidying up.”

“I’d gladly survey it and take some photos to show what has to be done.”

Cllr Ken Eastwood said Bradford Council should be contacted for advice on determining the pond’s ownership and seeking support to transfer ownership to the Parish Council or to a community group constituted to maintain the site.

He added, “We have a bunch of people volunteering to come forward and take action and we should encourage that. We don’t want to be seen as the people who are saying ‘no’. It’s surely our job as a Parish Council to enable and facilitate community action and to welcome volunteering.”

Parish council members agreed to investigate whether the pond currently has an owner, whether ownership can be transferred, and to liaise with the Facebook group members to suggest a date and time for a meeting to discuss the issue.

Want to join the discussion?
Feel free to contribute!

This website uses cookies to improve your experience while you navigate through the website. Out of these, the cookies that are categorized as necessary are stored on your browser as they are essential for the working of basic functionalities of the website. We also use third-party cookies that help us analyze and understand how you use this website. These cookies will be stored in your browser only with your consent. You also have the option to opt-out of these cookies. But opting out of some of these cookies may affect your browsing experience.
Necessary Always Enabled
Necessary cookies are absolutely essential for the website to function properly. This category only includes cookies that ensures basic functionalities and security features of the website. These cookies do not store any personal information.
Non-necessary
Any cookies that may not be particularly necessary for the website to function and is used specifically to collect user personal data via analytics, ads, other embedded contents are termed as non-necessary cookies. It is mandatory to procure user consent prior to running these cookies on your website.
SAVE & ACCEPT